Mediation- what is it and is it mandatory? 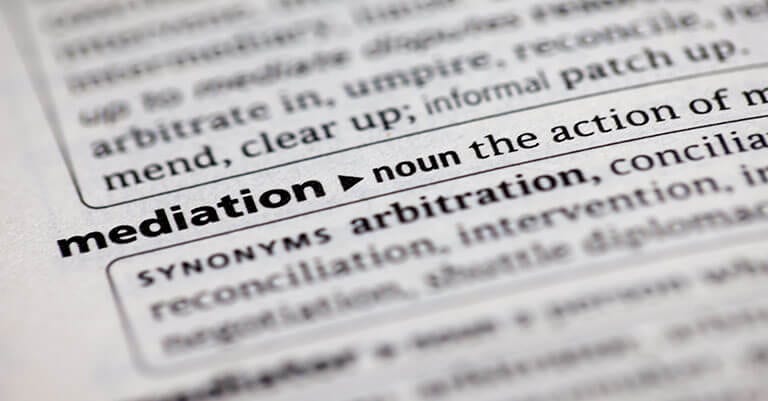 Put at its simplest, a mediation is an off the record meeting where two or more parties in dispute try to resolve differences with assistance from a mediator.

It follows that the choice of mediator is critical to the success of the mediation. The mediator hosts the meeting and acts as a channel for communications between the parties. They require a wide range of skills – commercial awareness, imagination, empathy, diplomacy and an ability to understand the issues and arguments.

One of the main problems with mediation is getting all parties to agree on a suitable mediator. Another problem is identifying the optimal time for a mediation.

Many clients mistakenly think mediation is part of the litigation process. They believe that they are obliged to go through the motions as a necessary step towards the resolution of their dispute. The fact is that no client can be forced to mediate. However, Courts and Tribunals do require the parties to seriously consider mediation because it can produce an effective resolution. Our experience is that about 8 out of every 10 cases that mediate lead to a settlement either on the day of the mediation or shortly afterwards.

Some cases are of course unsuitable for mediation. For example, it is questionable whether mediation would be suitable in an agreed small claims process such as the LMAA Small Claims Procedure. Likewise, the sums in dispute may be so great that the cost implications of litigating or arbitrating the issue would be insignificant in context. The parties may need a binding decision to set a precedent for other cases or they may require injunctive or other assistance that only the Court could provide.

It is not enough for a party to dismiss mediation on the basis that they think they have a cast-iron case. If the case is suitable for mediation and one party discounts this option, then the Court or Tribunal can sometimes intervene.

One option is for the Court or Tribunal to order a party or parties to respond to a proposal for mediation. They may even go as far as directing the parties to agree on the mediator, although they cannot force any party to compromise at a mediation. Other sanctions available are costs orders against the party or parties that are deemed to have unreasonably discounted mediation as an option.

Sanctions are typically imposed in cases where the party successful in the litigation refused to mediate. The unsuccessful party has to prove to the Court that the successful party acted unreasonably in refusing to agree to mediate. In the case of Halsey v Milton Keynes General NHS Trust [2004] EWCA Civ 576, the Court gave guidance on factors that help decide whether a party has been unreasonable. One was whether ADR had a reasonable prospect of success. This determination will not only rely upon whether, objectively, there was a real prospect of success, but also whether the behaviour of the successful party was unreasonable, in terms of, for example, how willing they were to compromise. Sanctions are also imposed where a party remains silent in the face of an offer to mediate without a reasonable excuse, or where a party drags out and frustrates the process for no good reason, when mediation is obviously applicable- this is the case even where mediation may not have been likely to succeed.

There are, however, cases where refusing mediation is not unreasonable. An example of this is Car Giant Limited & Anor v London Borough of Hammersmith [2017] EWHC 464 (TCC). Here, the Claimant delayed mediation for almost two years because they were waiting for the Defendant’s valuer to fully set out their views. This reasoning was considered perfectly acceptable by the Court, as it was considered important that the Claimant should have the necessary information in hand before going into a mediation. We see this quite often with mediations being proposed at an early stage before potentially damaging evidence comes out. The best time for a mediation is after proper disclosure so that each side can properly understand the other’s case.

In summary, mediation is an important consideration. However, clients are not obliged to agree to mediation if the circumstances are such that it is too early or the case is plainly inappropriate for mediation. It goes without saying that clients should be able to explain their reasoning when it comes to the issue of costs and sanctions. At BDM we handle dozens of mediations every year and so we are familiar with the process itself and the circumstances where mediation may or may not work.